Rana Safvi explores the life of Urdu journalist Maulavi Muhammad Baqar, who recorded the siege of Delhi during the 1857 mutiny in his paper Dehli Urdu Akhbar. 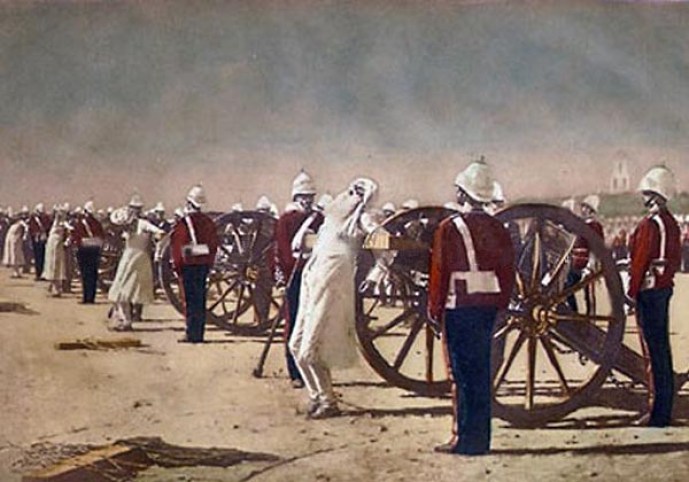 Vasily Vereshchagin’s Suppression of the Indian Revolt by the English. Credit: Wikimedia Commons

In 1884, Russian artist Vasily Vereshchagin painted his famous Suppression of the Indian Revolt by the English, in which he showed a man being tied to the mouth of a canon that was about to be blown. The man in question was Maulavi Muhammad Baqar, who I discovered during the course of my research. Though the description of the execution in the painting showing Baqar tied to the mouth of a canon, is incorrect, it shows how Baqar had captured popular imagination even three decades after the 1857 revolt.

After a four month long siege, Delhi fell to the British on September 14, 1857 and Baqar (1790-1857) was the first journalist to have fallen to the imperialistic designs of the British on September 16, 1857. He was a religious scholar who was well versed in Persian, Arabic, Urdu and English. He had received religious education from his father Maulana Muhammed Akbar (who was an eminent alim) and secular education in Delhi College, which he joined in 1825. Later he became a Persian language teacher at Delhi College.

He later joined the British administration under Charles Metcalfe but wasn’t happy there. His love for writing and journalism led him to buy a lithographic press in 1834. In 1836-37, theDehli Urdu Akhbarwas born. The monthly subscription rate was Rs 2. One could subscribe to it at Rs 11 for half a year or annually for Rs 20.

Although it was not India’s first Urdu newspaper – that credit goes to the Jam-e-Jahan Numa, which was started in Calcutta in March 27, 1822 – the Dehli Urdu Akhbar was Delhi’s first Urdu newspaper. Newspapers that had existed in Delhi prior to this – the Sultanul Akhbar, the Sirajul Akhbar and the Sadiqul Akhbar – were all in Persian.

The May 17, 1857 edition of the Dehli Urdu Akhbar was the first paper after the outbreak of the mutiny to obliquely refer to the destruction of tyrants such and Chengiz Khan. Baqar had not yet openly come out in support of the sepoys at this time.

In 1857, as the revolt spread around north India, Baqar changed the name of his newspaper from Dehli Urdu Akhbar to Akhbar-uz Zafar from July 12, 1857. This was meant to be a tribute to Bahadur Shah, whose penname was Zafar – the last Mughal in Delhi to whom the mutineers rallied. He began to publish on Sundays, instead of Saturdays, as an act of defiance against the British, who observed sabbath on Sundays.

Azizuddin Husain of Jamia Millia Islamia University, in his work ‘Maulvi Muhammed Baqar Dehlavi’s Editorials in Condemning British Policies Against Indians in his Newspaper Delhi Urdu Akhbar, from May to September, 1857’, describes the life of Maulvi Mohamamd Baqar and cites references from the Dehli Urdu Akhbar, preserved as part of the Mutiny Papers collection in the National Archives, Delhi. Husain writes that only 16 issues of the Dehli Urdu Akhbar, from March 8, 1857 to September 13, 1857 are available now.

He writes that “it provides us with lot of information about Shahjahanabad of 1857, as well as adjoining towns like Lucknow, Agra, Kol, Buland Shahr, Jhajjar, Rohtak, Ballabhgarh, Rewari, Ambala, Gawalior, Jhansi etc.”

Before May 11, 1857, Dehli Urdu Akhbar derived its news from government gazettes, other newspapers and from unpaid freelancers writing to the editor. It covered a variety of news from all over the world. It also had a column called ‘Huzoor -e- Wala’ on the emperor.

However, once the mutiny broke and reached Delhi, the city came under siege and was isolated from the rest of the country. The content of Baqar’s newspaper had to be confined to local news within the walls of Delhi.

On May 11, 1857, the sepoys came to Delhi and along with them came the inmates released from the jail in Meerut. The jails of Delhi were also broken into and their inhabitants released. Most of the contemporary Urdu chroniclers of Delhi in 1857 described in detail the violence and pillage that followed. As did Baqar. At the time it was in no way a sign of his shifting loyalties, but simply his loyalty to his profession to report truthfully.

Heena Yunus Ansari, a PhD student in Delhi University, in her unpublished dissertation – ‘Indigenous discourse of the Great Uprising of 1857: A study of Urdu Weekly Newspapers from Lucknow and Delhi’ – examines the Dehli Urdu Akhbar and the Tilism- e-Lucknow.

She writes: “Maulvi Baqar had the larger picture before him. He saw them as liberators of the people who smashed the pride of the British. For him their uncivil behavior was simply an act of aberration.”

The sepoys were encouraged in the paper. The issue on May 24, 1857 exhorts the sepoys saying that just as great emperors like Solomon and Alexander, tyrants such as Chengiz Khan, Halaku and Nadir Shah, and epic heroes and sages had all disappeared, the British too would one day disappear.

Shafey Kidwai, chairman of the department of journalism and mass communication at Aligarh Muslim University, describes Baqar as being the first spot reporter of Urdu. He has translated the May 17, 1857, issue of Baqar’s newspaper and any journalist today will likely relate to it.

The present scribe too came out of his house to see things for himself, inspired as he was by a regard for the glory of his faith and hearing the sound of gunfire. I was confronted by a strange sight: people were running from the Kashmiri Gate side into the market. Personal safety was no doubt in danger, but dearer to me than my personal safety was the desire to see unusual sights and the other equally strong desire to give a faithful eye-witnessed account of events to my readers. As I moved forward, I heard gunshots…a little ahead of me. Soon, I saw the Sahib Bahadur running for his life, sword in hand and a native following him with gun close at heel. In the rear was a crowd of common people, some with sticks in their hands, others with bamboos, chasing the beleaguered Englishmen at hot speed. They hunted down from Zeenat Bara towards the canal.

Poem by Mohammed Hussain Azad, published on May 24, 1857, openly in support of Badshah Bahadur Shah Zafar and against tyrants like the British.

The Urdu writer and poet Mohammad Hussain Azad was Baqar’s son. A May edition of the paper carries his poem under the title Chronogram for this Instructive Revolution.

But today their wisdom vanished and their conquering army proved ineffective.

In June when many other Indian soldiers of the East India Company had rebelled against their masters and joined their brethren to fight against the British under the banner of the Mughal Emperor Bahadur Shah Zafar, the tone of the newspaper reflects the general attitude.

The sepoys are now enjoined to display communal harmony and exhorted to pray to their respective gods and emulate Bhim and Arjun, Rustam, Chengiz and Halaku. They are now called sipah-i-Hindostan (the Army of India) and there are appeals now to ‘fellow countrymen’ (ahl-i watan), ‘dear compatriots’ (aziz ham-watan), with specific exhortations for a united rallying of Hindus and Muslims

George William Forrest, British historian, mentioned in the introduction of the State Papers soon after the end of the mutiny: “Among the many lessons the Indian mutiny conveys to the historian, none is of greater importance than the warning that it is possible to have a revolution in which Brahmins and Sudras, Hindus and Mahomedans, could be united against us…”

It was in this scenario that Baqar rendered his most singular service via his newspaper.

On its front page was a copy of an advertisement that had been pasted on the walls of Delhi’s Jama Masjid, which called upon Muslims to wage a jihad or holy war against the Hindus, for as per the sharia the Christians were their friends as sahib e kitab, or people of the book. The advertisement also said that no pig fat was used in the cartridge, implying that cow’s fat had been used.

Baqar realised that this had to be the work of alleged British agents and denounced it in his newspaper.

Ansari, in her dissertation has given a point-by-point rebuttal that Baqar had made at the time.

Regarding the issue of cow’s fat used in the cartridges she quotes the newspaper,

The British officers say that the rifles were filled with the fat of cows and not of pigs. If that is so it will hurt the Hindus and if today Hindus are suffering, tomorrow it will be our turn.

Baqar continues to say that Hindus and Muslims are fighting side by side and that they should stay united as Hindustanis and stop the British from playing with the religious sentiments of the Indians.

If they really wanted to look after the interests of the Indians, he argued, the British should have been more sensitive and not forced people to switch their religion, or to fight one another.

We advise all the rais, rajas and jagirdars that they should not support British because they are not sincere. They never care for their promise. They are basically traitors. If you will not listen then you will regret one day.

Husain also wrote that on July 19, 1857, Baqar wrote the verses of Shaikh Sadi that highlight the unity of human beings. “Those sons of Adam are limbs of each other – Having been created of one essence when the calamity of time afflicts on one limb – The other limb cannot remain at rest.”

These Persian verses are also inscribed on the main gate of the UN building in New York.

Baqar used stirring prose and verse to uplift the spirits of the Indian soldiers and to ensure the unity of the Hindu and Muslim soldiers fighting the British army.

As such, the portrayal of Baqar as a turncoat, becoming an informer for the British, as has been described by William Dalrymple in The Last Mughal, doesn’t ring true. No evidence to this effect has been discovered in the archives. Shireen Moosvi rebutted the allegation that Baqar was trying to broker peace between the emperor and the British, an eventuality that was being prevented by Hakim Ahsanullah Khan, the prime minister.

Moosvi wrote, “Whether such a letter was actually sent by Baqar or not cannot be established; but the English, at least, did not treat him as their informer: he was seized and hanged, while Hakim Ahsanullah flourished.”

Khan gave witness against the emperor in his trial and suffered no harm at the hands of the British. In fact, the Indian soldiers suspected him of treachery almost from the beginning. The elite of Shahjahanabad never forgave Khan for testifying against the emperor, as is clear from contemporary Urdu writings.

Baqar, however, was arrested on September 14, 1857, as soon as the British managed to breach the Kashmiri Gate and enter the walled city of Shahjahanabad. On September 16, he was produced before Major William Stephen Raikes Hodson who ordered his execution without a trial. Some reports say that Hodson shot Baqar himself at point blank range.

Baqar breathed his last on September 16, even while the emperor was still in the Qila and the Mughal empire had not ended formally.

Rana Safvi is a writer and author of Where Stones Speak: Historical Trails in Mehrauli, First City of Delhi.

Siri the second city of Delhi

The Shah Burj in Red Fort, Delhi : Then and Now

by ranasafvi
Leave Comment
No Result
View All Result