Will our Red Fort be called The Dalmia Bharat Red Fort?

To clear prevailing confusion, the corporate group will not be doing any conservation work.

So has the Red Fort really been passed off to a private body?

In September 2017, the ministry of tourism, government of India launched what it called “Adopt a Heritage, Apni Dharohar, Apni Pehchaan, Project for the development of Tourist Friendly Destinations September 2017”.

As part of it, private or public sector companies/individuals would “adopt” heritage structure for upkeep, and be called “Monument Mitras”.

The rationale given for this was that since India was a culturally rich country and tourism was on steady rise, there was a need to provide basic amenities to tourists on an immediate basis, and advanced amenities on a long-term basis.

The vision statement of the projectsays, “Ministry of tourism in close collaboration with ministry of culture and Archeological Survey of India (ASI) envisages developing the heritage sites, monuments and any other tourist sites by making them tourist-friendly to enhance the tourism potential and their cultural importance, in a planned and phased manner.”

The objectives of the project listed on the government document are:

There will be expert committees to oversee the projects, and 93 monuments based on footfall have been identified for it.

In the case of Red Fort

There seems nothing objectionable to this on the surface. Yet, as soon as the news was announced, social media was abuzz with messages that the iconic Red Fort had been sold.

Do you know the Govt of India has sold the Red Fort for 25 crore Rs?

There must be better ways of maintaining a nation’s greatest monuments than by auctioning them off to a corporate househttp://wap.business-standard.com/article/companies/shah-jahan-s-iconic-red-fort-in-delhi-is-now-dalmia-group-s-red-fort-118042700414_1.html…

Conglomerate has become the first corporate house in India’s history to adopt a historical monument, in a Rs 250 mn contract spanning five years

Wah! So here is acche din. Red Fort being ‘sold ‘? Now other national treasures ready to be auctioned to highest bidder. As Chairman Parliament Cmtee of Transport Tourism & Culture, can say matter was still being “discussed”. Pledge to stop this

There’s a huge difference between Dalmia adopting, say, a haveli in Old Dilli and adopting the Red Fort itself.Tier 1 monuments are a nation’s crown jewels. They should not be played around with. Its even more worrying that corporates cannot be held responsible for any damage.

Considering that VIshnu Hari Dalmia is such a revered name of the Vishwa Hindu Parishad & the Ramjanmabhoomi movement, adopting the Lal Qila for management by his group, is such an act of grace in #NewIndia http://www.business-standard.com/article/companies/shah-jahan-s-iconic-red-fort-in-delhi-is-now-dalmia-group-s-red-fort-118042700414_1.html…

The supporters were not far behind.

Red Fort Is Not Sold Out Or Leased,It’s Adopted By Bharat Dalmia Group For Development & Maint. For 5 Yrs
It’s Part Of CSR Activity,Of Course It Will Be Non Profit 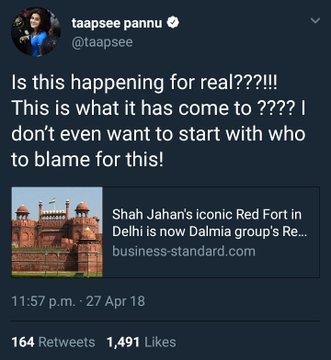 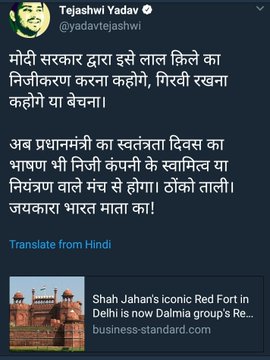 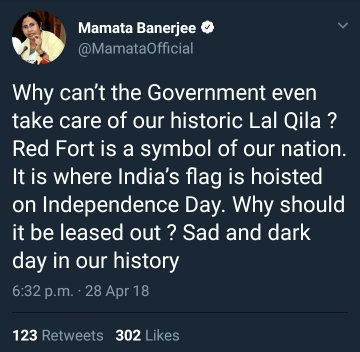 How about leasing the Tower of London, to a company like Krupp that collaborated with Hitler. Kosher? https://twitter.com/sumanthraman/status/990212924776923136…

Sir is this a Lease? What rights over the place does it confer on them? As I understand it they are going to maintain the place and get publicity out of it in return. Do they get any rights? How can this be called a Lease? Kindly clarify.

Good for tourism, bad for heritage?

There was speculation that the Indian National Trust for Art and Cultural Heritage (INTACH) could be involved in the project too, so I contacted Swapna Liddle, the convener of INTACH’s Delhi Chapter, for her views.

Liddle said INTACH was not involved in the process, but “As for the adoption, it is about building and maintaining visitor amenities. Considering that right now, these are really poor, this might be a good idea. The ASI, I trust, will play a proactive role to ensure that the aspects concerned with historical information – signage, interpretation centres, audio guides, etc., will be approved by experts. The building and maintaining of an interpretation centre will also be the responsibility of the group that adopts the heritage building. Interpretation centres give a brief history of the monument, its conservation record, etc.

Syed Ali Nadeem Rezavi, chairman and coordinator, CAS in History and coordinator, University Museum, AMU, who is an expert in medieval Indian history and archaeology, is more alarmed at the consequences of such “adoptions”. He feels history maybe “tailored” here.

Rezavi said: “Actually, it’s a very sad day for India! Even our monuments and past are being commercialised. This is a step far more dangerous than we can imagine at the moment. The first baby step in this direction was taken when Humayun’s Tomb was handed over to the Aga Khan Trust, and its technocrats destroyed its authenticity to convert it into a modern money-spinning enterprise.”

However, there are arguments that the ASI is too starved of funds to give the monuments the care they need and deserve.

KK Mohammad, regional director (retired), ASI, says: “ASI faces a cash crunch, which has an impact on infrastructure and facilities at the monuments. In the light of this, the adoption is a good step. ASI doesn’t have the manpower to manage these huge monuments. They need toilets, parking pathways and interpretation centres, which is beyond the capacity of the ASI and its straitened finances.”

Since there are so many conflicting opinions, let us examine what is really happening here.

TheQila e Mubarak, or Red Fort, will complete 400 years on June 15. It was on June 15, 1648 AD, that Shah Jahan entered the Qila e Mubarak and illuminated the grounds with his blessed presence.

A per the ministry of tourismdocument quoted above: “The fourth party [Monument Mitra] agrees during the period of adoption that no revenue will be generated from the public as collection fee, convenience fee etc. However, in case any fees are planned to be charged, it will be subjected to specific clearance of the relevant Government parties to the MoU.”

The contract has been given to the Dalmia Bharat group for Rs25 crore for 5 years. According to theBusiness Standardreport: “TheDalmiaBharat group will charge people visiting theRed Fortafter getting specific clearances from the ministry of cultureand the ministry of tourism. Any revenue generated through the activities planned by the corporate house would also have to be ploughed back into the Fort’s development and maintenance. ”

The project is supposed to be done from the company’s CSR funds and is a non-profit enterprise.

Since I write on heritage and have an upcoming book on the iconic Red Fort, I have researched its past and present thoroughly. I have also found about ASI ticket sales in monuments. As per figures given by the Ministry of Culture in Lok Sabha, just the Taj Mahal, built by Shah Jahan, has an average annual ticket sale of over Rs 21 crore (last year saw a drop in visitors to the Taj Mahal and figures stood at Rs 17.8 crore).

The Qutub Complex generates over Rs 10 crore in ticket sales, Red Fort and Humayun’s Tomb generate around Rs 6 crore each.

This money goes directly to the ministry of culture, which allocates funds to various monuments. I know the Red Fort got a measly Rs 50 lakh a year allocation till two years ago.

In this scenario, the Dalmia Bharat Group will be collecting Rs 6 crore X 5 years = Rs30 crore.

Once they improve infrastructure, the sales will go up, as they did in the case of Humayun’s Tomb. So how much of their own funds will be pumped in?

Again, according to theBusiness Standardreport: “The Dalmia Bharat Group would be allowed to charge visitors for semi-commercial activities that it plans to conduct. The “reasonability of the rates charged for the services” would be determined by a joint committee headed by representatives of the Archaeological Survey of India, Ministry of Culture and the Dalmia Bharat Group. All revenues generated from these “semi-commercial activities” would need to be deposited in a separate bank account that would be used only for developing and maintaining the monument.”

They will have “semi-commercial activities” at the Red Fort, so are we looking at revenue generation of over Rs 10 crore a year? Will they put back this entire amount into the fort’s maintenance? If that is the case, any heritage organisation could have done the same, and in fact looked after the fort as a beloved heritage and not just a money-making venture.

So, we await clarity and transparency till the exact terms of the Dalmia Bharat group and ministry of tourism contract are released.

Let us now examine the second cause for concern:

As per theBusiness Standardreport: “Two aspects of the Red Fort’s adoption deal stand out from all other aspects. Firstly, the government has promised the Dalmia Bharat Group that it would be held “harmless” in case the Archaeological Survey of India and others like Delhi’s district collector decide to pursue any claims related to the work done on the monument. While the indemnity clause may help against pressure tactics and frivolous activism of the “culture brigade”, it also gives creative freedom for transforming the Red Fort.”

Let us take the indemnity clause, which, as per the Ministry of Tourism document quoted above, says:

“First, Second and Third party will identify and hold harmless ……… Fourth party (company/Trust and its officers and employees), against any loss, costs and expenses of any third party claims which the latter may suffer as the result of any claims or proceedings brought against them arising from work performed in accordance with the scope of work and performance of this understanding.”

To clear prevailing confusion, the Dalmia Bharat group will not be doing any conservation work, as Aga Khan and INTACH do. It will only develop and maintain infrastructure of the tourist amenities in the Red Fort complex, and not the monument itself.

However, even the maintenance of a 400-year-old monument is a delicate job. Any mistake could shake its foundation and cause it irreparable harm. So why has the Dalmia Bharat Group been indemnified of any damage that they may unwittingly incur upon our heritage? I am sure with their expert committees, they will not let any harm come to the fort, but every corporation has inbuilt accountability. Why doesn’t this corporate have inbuilt accountability in this case?

The Red Fort is an integral part of our heritage. Apart from the Mughal chapter of the fort’s history, it was here that the First War of Indian Independence was started, where the British Union Jack was taken down, and the Indian Tricolor hoisted. It is from here that the Prime Minister of India addresses the nation on every Independence Day.

Siri the second city of Delhi

The Shah Burj in Red Fort, Delhi : Then and Now

by ranasafvi
Leave Comment
No Result
View All Result